Oh, my, I just realized the cake has not been written up. I’ll need to get a photo the next time I bake it, but here’s the recipe. 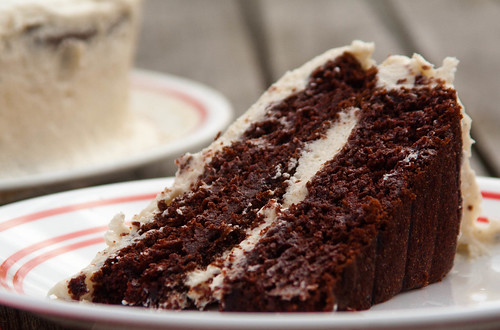 This is *the* cake. Friends request it for special occasions. They discuss it among themselves and with other people in hushed voices. They rave about it, and marvel that it is so delicious.  Because, you see, the main ingredient is beets.

I went on a kick trying to make a traditional red velvet cake that was actually red without adding food coloring. I never quite succeeded, because I always want it too chocolatey.  I expect if I reduced the cocoa and used unprocessed (not “Dutch” or “Dutched”) cocoa I would get there.  But this is too good as is to really go mucking about.

The cocoa I use and recommend for this recipe is from World Spice Merchants here in Seattle, and is called Mayan Cocoa. It has chili and ginger and cinnamon and other stuff in it, and compliments the recipe enormously.

It is possible to use canned beets with this recipe.  I choose not to most of the time because I try to avoid the can whenever possible. Boiling down the beets takes a good long time, though, so when I want to make this on short notice I’ll generally use canned. Do what’s right for you.

Chop the beets into small-ish pieces, and put into a food processor or blender until pureed.  Then dump out into a saucepan. Add a little water, initially, if the beets seem too dry at the start; you will boil it off at the end. Simmer covered over low heat for about 3 hours, or until the mix is the consistency of applesauce. Remove the lid and cook off some of the remaining liquid until you can see the bottom of the pot when stirring with a spatula. Allow to cool enough so that it won’t cook the eggs when added.

Preheat oven to 350. Coat two 9″ circular cake pans, or a 9×13 rectangular pan, with cooking spray and cornstarch or tapioca flour.

In a stand mixer or with a hand mixer combine beets, cocoa, and vanilla until well mixed.

If you are using the recommended cocoa mix, put it through a spice grinder or coffee grinder, and then sift, so that all the little chunks of spices are chopped up fine or removed from the blend.

Mix the dry ingredients together in a separate bowl.

Add the dry ingredients to cocoa mixture, a little at a time. Blend in eggs. If the batter seems too thick, add enough water to make a good cake batter. Beat two minutes with an electric mixer.

Divide mix evenly between the pans. Spin the pans to spread batter up the sides– this prevents the cake from ending up domed on top. Bake for 25-30 minutes.

Remove from oven. Cool in the pan for a couple minutes or until the cake starts pulling away from the sides of the pan. Flip out onto a cooling rack. 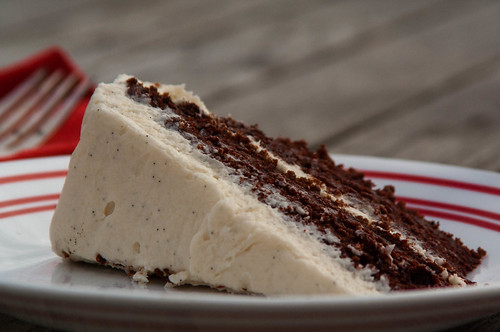 This is going to sound like a lot of mixing, but really, trust me. Adding all the air by beating these FOREVER is what makes it good.

Fold in the powdered sugar a little at a time, until the mixture thickens to the right consistency for a spreadable icing. If you get much past 2 C of sugar, you may find it works better to add a little corn starch to thicken it up the last bit. This is particularly a good idea in warmer weather, where butter cream frosting tends to melt on the cake. The corn starch helps it stand a little more heat.

Beat on high another minute.

Let stand at least 15 minutes or until the cake is COMPLETELY cool before frosting.